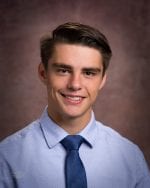 Jacob Alexander Estep, graduating from Central Catholic High School, was born on December 19, 2001 to John and Lydia Estep. Before coming to Central Catholic he attended Corpus Christi Grade school. Throughout his high school career Jacob maintained Distinguished Honor Roll status and has been inducted into the National Honor Society, Mu Alpha Theta, Rho Kappa, and the Spanish National Honor Society. Additionally, he was elected the president of Mu Alpha Theta and the vice-president of the National Honor Society. Also, Jacob was named an Elks student of the month in January. In addition to achieving in the classroom, Jacob has been active in extracurricular activities.  He has participated in the Science Bowl, been an active member in the Math Club, and has participated in Teens for Life. During all four years of high school Jacob has traveled to Washington DC with Teens for Life for the annual March for Life which seeks to end the murder of innocent children through abortion. Also, Jacob has been active in the community, volunteering for the miracle league and annually volunteering for the canned food drive. Furthermore, he has volunteered for over 150 hours at Wheeling Hospital. Not only has Jacob excelled in the classroom but he has also performed well on the soccer field. Starting to play soccer at the age of four, Jacob has always enjoyed the sport. Off to a rocky start, Jacob was severely injured pre-season during his freshman year and was unable to play the rest of the year. Making a tremendous comeback, throughout his high school career, he has been named first team all-state twice, West Virginia region one player of the year twice, OVAC player of the year for his division twice, All-Valley team captain twice, and set a new all-time goal scoring record of 120 goals. Jacob has greatly enjoyed his time at Central, particularly spending time with his friends and going to sporting events. Jacob will be attending Franciscan University of Steubenville this fall pursuing a degree in biochemistry with the goal of becoming a physician.

Being able to keep everything is the perspective of God is important in life. Wheeling Central has helped me grow in my faith and showed me that nothing happens without God. All of the successes and hardships that I have experienced is because the Lord wanted it that way and as long as I trust in Him, He will guide me to happiness with Him in heaven. All that I do, I try to do for the glory of God, for without Him, I would be nothing. 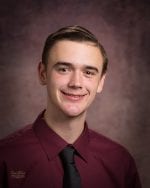 William “Gabe” Bolon, a graduating senior from Central Catholic High School, is the son of Bill and Becky Bolon. Throughout his high school career, Gabe has maintained Distinguished Honor Roll Status and has been inducted into the National Honor Society, French Honor Society, Rho Kappa and Mu Alpha Theta honor societies. Gabe is the recipient of the Operation Round Up scholarship as well as the Land Grant Opportunity scholarship. As well as having an exceptional record in the classroom, Gabe has been active in extracurriculars as well. He is a member of Drug Free Clubs of America, secretary of the senior class, and the French club treasurer. Gabe has volunteered over 80 hours for Crossed Paws Animal Shelter since his freshman year. His senior year, Gabe became the captain of Central’s first bowling team. Gabe will attend the Ohio State University and major in accounting with the goal of becoming a certified public accountant.

Trying to manage all the difficulties of academics and extracurriculars is very taxing at times. Central has taught me to budget my time effectively and seek out new opportunities without overworking myself. This skill will definitely help me with my studies at Ohio State and later in life.